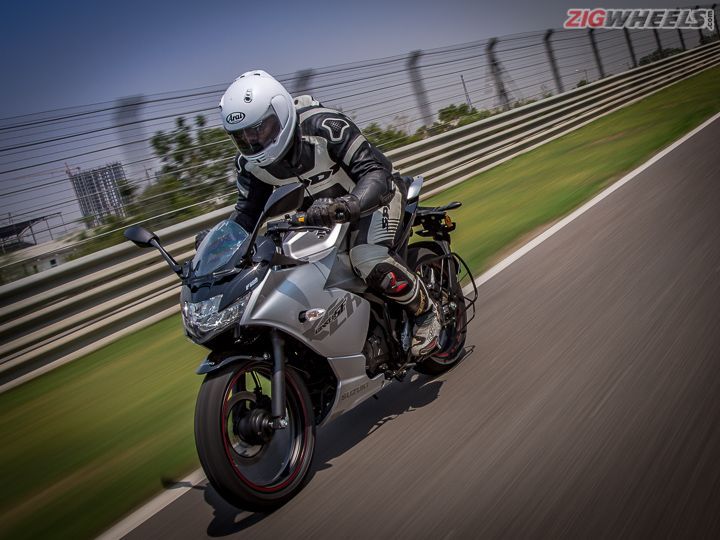 A 150cc motorcycle at the Buddh International Circuit (BIC): sounds like overkill, but we are excited because the bike in question is the new Suzuki Gixxer SF. First launched around four years ago, Suzuki has given the full faired bike a cosmetic makeover, some new features and a sporty avatar. So are the updates relevant enough to make the Gixxer SF more popular among Indian bikers? 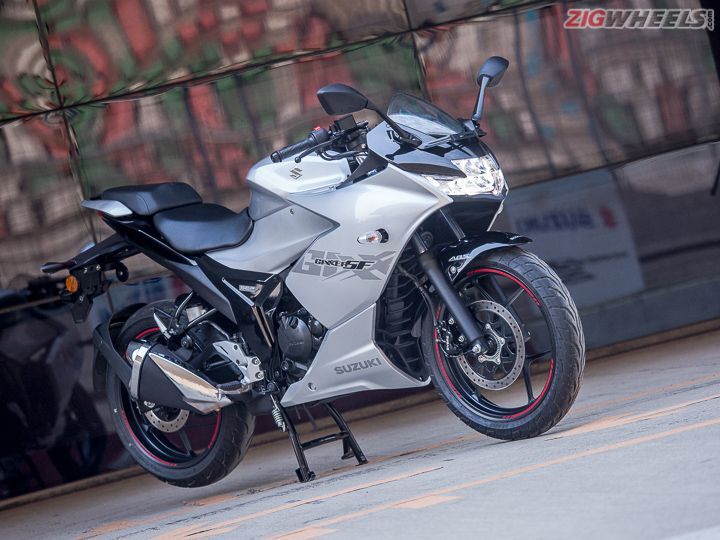 Gets a dose of flash
The new Gixxer SF doesn’t look like any other Suzuki bike on sale in India or globally, for that matter. The styling of the new bike is all new. The edgy new LED headlight gives it a distinctive face and is kind of reminiscent of the first-gen Karizma ZMR. It also features a redesigned LED tail light that’s larger and flows well with the new styling. The new bike still sports a stubby exhaust muffler with twin ports, but the chrome finish on the tip looks a bit tacky. 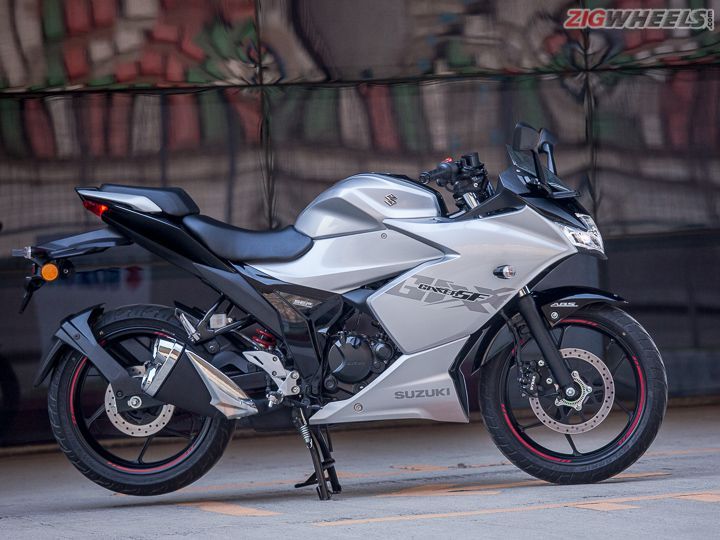 The fully faired Gixxer SF has taken on a more sporty tone – you get clip-ons instead of a single piece handlebar, and there are split seats too. And the larger, smoother fairing just wraps it all up beautifully. However, we would have liked a taller windscreen for aesthetic and functional purposes. The instrument console also gets a new layout and it’s much easier on the eyes and the shift light indicator has now been positioned in the center. The fit and finish levels are impressive, while the switchgear has been carried forward from the older bike. 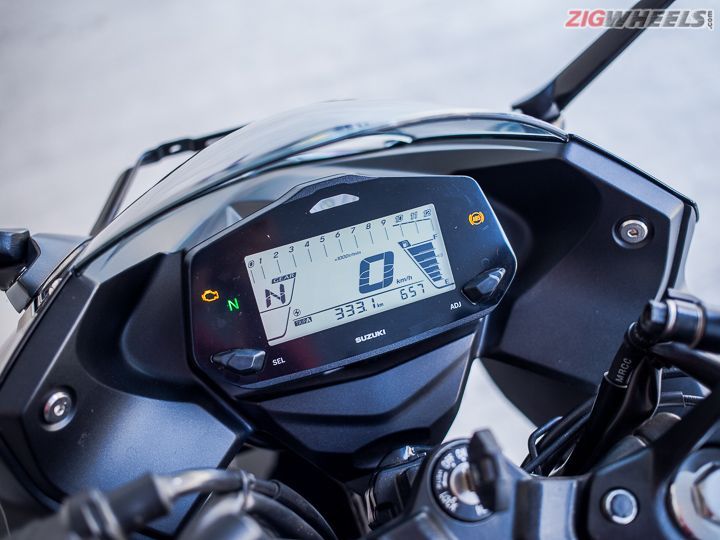 Overall, the 2019 Gixxer SF is a bit polarising. But it must be said that it packs in more attitude and sportiness than before and you’ll feel it when you see the bike in the flesh.

More performance?
While we were expecting the new motorcycle to be slightly more powerful than its predecessor, it’s actually 0.7PS lower than before. To complicate matters further, the new bike is also 6kg heavier! So has the performance gone down?

Well, not really. The Suzuki Gixxer SF was known for its strong bottom and mid-range performance, which made it a fun-to-ride bike in the city. Gladly, the new motorcycle carries forward this trait. However, on the long straights of the BIC, the lack of top-end grunt was clearly evident. Throttle response is precise though. And talking about roll-on figures, the bike managed to chug along from 25kmph in fifth gear. The slick 5-speed gearbox unit continues to impress. As for fuel efficiency, Suzuki claims a WMTC figure of 49.4kmpl. 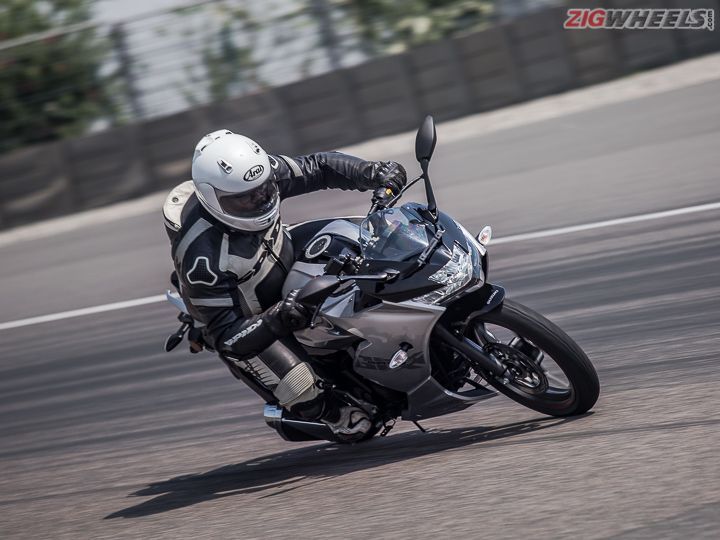 Is the handling as sporty?
Like the styling, the 150 also shares the frame with the Gixxer SF 250, which is part of the reason why it’s heavier than before. The new frame has thicker pipes which increase rigidity but has also added 1.5kg to the overall weight. The revised frame has also resulted in the wheelbase increasing by 10mm. 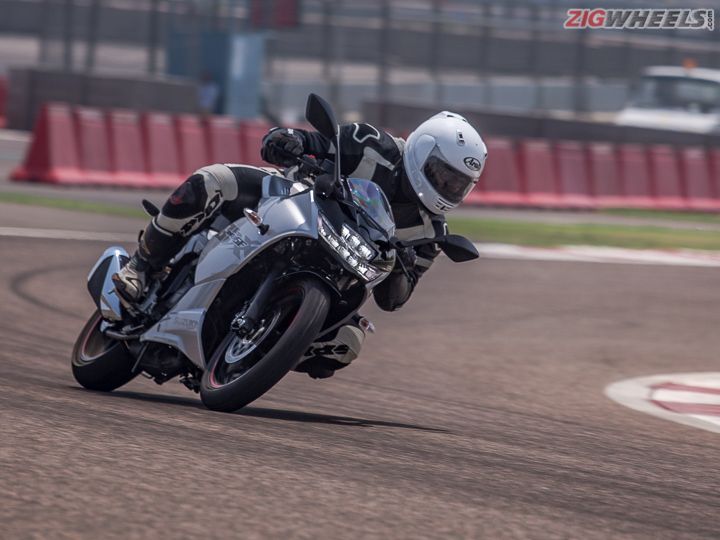 So the key question: is it as fun as before? The simple answer is yes! In fact, The new bike is even more agile than the older one and it tips into a corner even faster. And that too in a confident manner which will be appreciated by both beginner and fast riders as well.

The suspension and braking hardware have been carried forward from the older model. Given the near perfect tarmac of BIC, assessing the ride quality was difficult. But Suzuki officials confirmed that they have made the rear suspension slightly softer for better ride quality. Even the brakes feel more progressive than before.

Sporty, but comfy!
The Gixxer SF finally gets a clip-on handlebar, as it should have when it was launched in 2015! The clip-ons aren’t very low-set, while the footpegs are marginally rear-set. This means the riding posture is slightly sporty while maintaining the comfort factor. It isn’t aggressive as the KTM RC 200. So long hours on the bike wouldn’t be much tiring. Additionally, the seat cushion has been made slightly firmer as the old seat was too soft.

Summing it up
The new Gixxer SF is priced at around Rs 1,09,870 (ex-showroom, Delhi), which makes it close to Rs 8,000 more expensive than the older Gixxer SF. So does it justify the premium?
Given the sort of updates, a price hike of Rs 4,000 would have been fair. Having said that, the new motorcycle carries forward all the positive aspects of the older bike and the better handling dynamics make it an even better bike. However, the lack of top-end grunt is the only chink in an otherwise well-executed motorcycle.