This girl is on fire. Quick change artist Deepika Padukone gave us four looks on her second day at the 72nd Cannes Film Festival, in rapid succession. The 33-year-old actress posted pictures of her looks on Instagram – a striped pant suit, a black and neon dress, a sheer shirt and pants in white, a floral dress. Her first look of the day ticks every box: trendy pantsuit in equally trendy (and very French) blue and white stripes by LOEWE, elevated by a pair of neon orange pumps. Also sunglasses, let’s not forget the sunglasses. Deepika looks cool, casual and chic and we muchly approve. Deepika’s husband Ranveer Singh also approves and has managed to post not one but two comments, within minutes of Deepika sharing the photo of herself on Instagram. ‘Bawse,’ wrote Ranveer Singh and then, because he clearly felt one comment was inadequate, added ‘killing it, haan.’ Except he added a few extra alphabets, in case we didn’t get it. 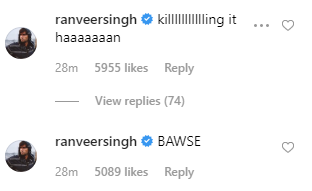 Deepika Padukone’s second outfit was a black tulle prom-like dress by Off White with a neon green bit to make it pop. She wore fairly major looking black trainers with it.

The third outfit was a summery confection of white pants and a white lacy shirt over a matching bra top, by Philosophy.

Deepika’s next change was into a floaty floral dress by Erdem.

About the statement shoes Deepika seems to be favouring these days – she landed in Cannes a day ago wearing a relatively simple outfit of white shirt and denim, finished with a pair of fire engine red heels.

It was 8.30 am in Cannes when Deepika Padukone posted the picture of her first Day 2 look but she looks bright-eyed and bushy-tailed, despite having flown into Nice airport yesterday, gone straight into hair and makeup and then walked the red carpet wearing a Dundas gown in cream with a giant bow. That’s probably because she went to bed straight after (partly for fear of being told off by her mother for not getting enough rest),

Here’s the wrap video she posted:

This is the third year that Deepika Padukone is representing cosmetics giant L’Oreal at Cannes. She will likely make a couple of more appearances on the red carpet and will then be succeeded by fellow L’Oreal ambassadors Aishwarya Rai Bachchan and Sonam Kapoor. Yesterday was a day of triumph for India on the Cannes red carpet – apart from Deepika, Priyanka Chopra and Kangana Ranaut also lit up the film festival, the former in a shimmering black Cavalli gown and the latter in a gold kanjeevaram belted with a corset.

Actresses Huma Qureshi and Diana Penty are also expected to walk the red carpet. TV star Hina Khan already did on Day 1 of the film festival.

This Redditor’s Optical Illusion Makeup Is the Definition of “New Year, New You”