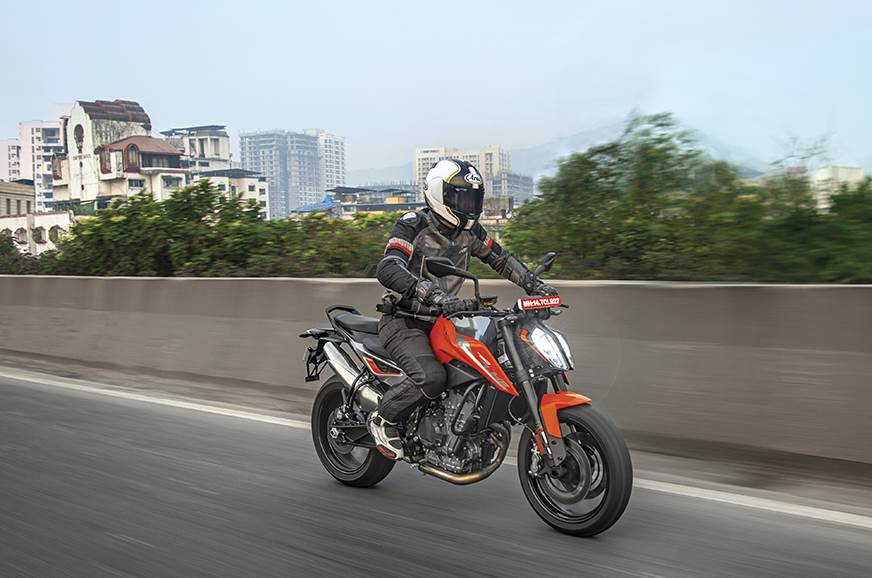 Call me crazy, but I am drawn to motorcycles that have a wild side. Quite predictably, Rishaad came back from the first ride at Bajaj’s test track in Chakan raving about what a hooligan the KTM 790 Duke can be, but I found something else he described even more interesting. When he wasn’t crossing 200kph on the straight and getting his knee down on every corner, he said the bike was incredibly docile and easy to ride at low speeds. What he couldn’t wait to find out is if the 790 Duke is the cracking road bike his intuition said it was going to be. Fortunately for me, he had other travel plans, so there was no fight when I leapt for the keys!

In the search for the most pure 790 experience, I started off in Track mode. Oh, what an experience it was! The bike got off the line violently and showed no signs of slowing down, even after we passed some unprintable speeds. To try and make this more understandable, we strapped a Vbox on and recorded a 0-60kph time of 1.97sec and 0-100kph in 3.54sec. Let that sink in. 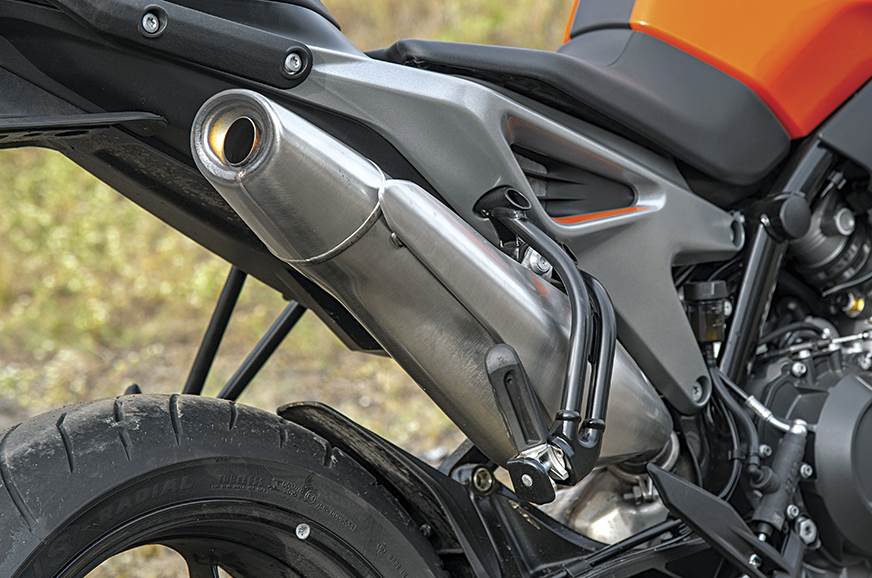 Growly exhaust note is quite like a V-twin, pops nicely under deceleration.

Despite my love for unruly motorcycles, and err, rebellious riding, I had to sober down as the whole idea of this story was to know what this bike is like around town. I moved on to Sport mode that, by far, was my favourite in and around the city. While it isn’t as aggressive as ‘Track’, it’ll still leave you smiling under your helmet. Unlike Track mode, this will let you open the throttle fully without sending the front wheel skywards. It’s still quite aggressive though; and if you engage Street or Rain mode, you won’t believe that you are on the same motorcycle. The gentle throttle response and smooth power delivery, especially in ‘Rain’, turns the 790 into such an easy big bike. In heavy traffic, you’ll be grateful for the light clutch, but the truth is you’ll almost never use it because the bi-directional quickshifter works incredibly well from even as low as 3,000rpm.

Sadly, the bike wasn’t with us long enough for us to conduct our standard fuel-efficiency tests. But in its time with us – a mix of aggressive and calm riding across both city and highway – it returned a decent 17.67kpl.

Another happy discovery was that the tractable gearing lets you potter around town at as low as 40kph in fourth gear, but when the space in front of you clears up, twist the throttle and the bike will immediately surge forward in anger. That’s because the torque is always accessible, far more so than with a high-revving inline-three or four-cylinder engine. 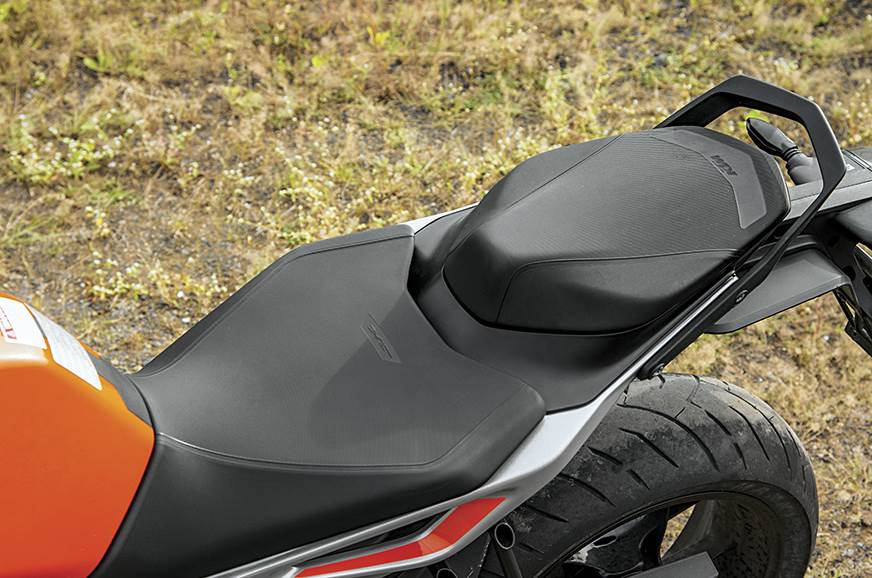 It’s not all perfect, of course, and there’s no escaping the fact that bigger engines produce heat. The heat here though is quite reasonable and only gets intense after a spending a good 15-20min stuck in bumper-to-bumper traffic; at this point the temperature gauge reads full, but the engine never cut out on us.

For all its ballistic performance, the 790 is really quite comfortable. The slight crouch to the bars is not as much as some other street nakeds, and you’re on a wide seat with your feet nowhere as far back as on a full-blown track bike. The suspension too is set towards the firmer side, but it’s not harshly stiff, and you can certainly get by most bad patches of tarmac as long as you aren’t carrying too much speed. The fact that there is no belly pan could have been stressful, but there’s so much ground clearance, you’ll never have to worry going over even the largest of speed breakers. What we also really liked is how slim the bike feels and how tight the turning radius is; but that exhaust placement was far too scary for everyone who I asked to go on a ride with me.

With that, it’s time to collect my thoughts. The 790 Duke isn’t like many other superbikes that suffer from claustrophobia in the city, and I would go so far as to say that you could ride it in the metropolis every day if you wanted to. It’s not fussy, and it switches into a fast road-destroying machine with (quite literally) the press of a button.

Downsides? Well, if you value size and presence, it simply doesn’t look or feel as big or special as an equivalent Italian or British rival. The Rs 8.64 lakh price tag will also be a bit steep for those who equate KTM with VFM. But you know what? If you simply want a thrilling ride at this price point, nothing does it quite like the 790. 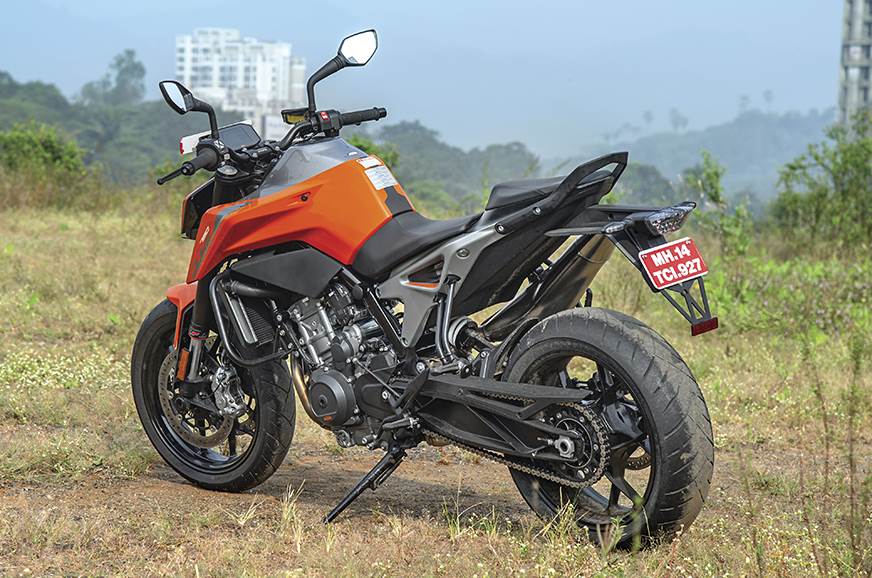