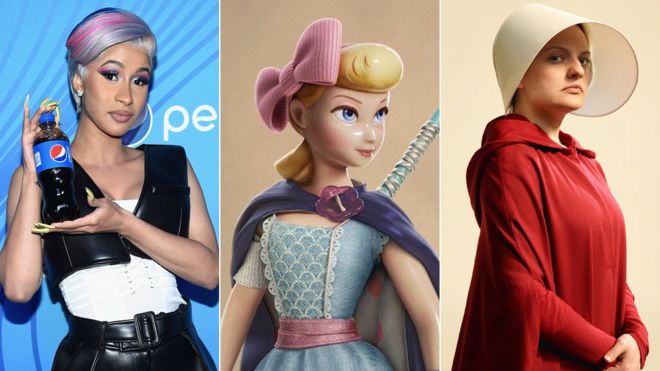 Many people outside the US may not give two hoots about the actual Super Bowl, but for the celeb spotters and film/TV fans out there, the ad breaks are what it’s all about.

Over the years we’ve seen Britney Spears through the ages for Pepsi (2002), Liam Neeson planning his revenge against a fellow online gamer on Clash of Clans in 2015 and Budweiser’s poignant 2002 tribute to the victims of 9/11.

Here are some of the big talking points from the halftime show.

There weren’t as many film trailers on Sunday night as in previous years, but we still got to see ads for some major Disney properties.

There was a teaser for Avengers: Endgame, which saw the superheroes who survived Thanos’s snap preparing for battle. Brie Larson’s Captain Marvel is expected to play a key role in that film, and her standalone outing also got a new trailer.

But perhaps the most exciting Disney drop of all was a brief glimpse at Toy Story 4, expected to be the final film in Pixar’s Toy Story franchise.

The teaser is set at a funfair, with Tim Allen’s Buzz Lightyear struggling to break free from a game.

The spaceman toy is seen being heckled by fluffy prizes Ducky and Bunny, voiced by comedy duo Keegan-Michael-Key and Jordan Peele (more on him in a sec).

Most excitingly, we got a glimpse of Tom Hanks’ cowboy toy Woody interacting with his old flame Bo Peep.

Bo, voiced by Annie Potts, was absent from Toy Story 3, but now she’s back with a new look.

Director Josh Cooley has said that, in this film, “Bo’s taken control of her own destiny”, so how will Woody react to the shepherdess’s new independent streak? We’ll have to wait until Toy Story 4 is released on 21 June to find out.

Last year, Peele became the first African-American to win the Oscar for best original screenplay for his breakout horror Get Out.

This year, he made a significant mark on the Super Bowl ads. As well as appearing briefly in the Toy Story 4 teaser, he shared a terrifying look at Us, his follow up to Get Out, and took the audience into The Twilight Zone.

New episodes of the classic anthology show will air on the CBS All Access streaming service.

The cult sci-fi show, which incorporates elements of horror and suspense, began in 1959 and has been rebooted several times since then.

The trailer playfully unveiled the show, with CBS’s Super Bowl telecast appearing to glitch out, and Twilight Zone host Peele asking viewers, “when truth is not the truth, what dimension are you even in?” before he disappears through an open door.

With man-of-the-moment Peele hosting and appearances from stars like Adam Scott and Greg Kinnear, let’s hope this version of The Twilight Zone is more than just a one-season wonder, like the mediocre 2002 revival.

While there weren’t as many trailers for Hollywood blockbusters as in previous Super Bowls, several streaming services bought ad space to generate buzz for their shows.

They included Hulu’s first preview of the third series of The Handmaid’s Tale. The series, which stars Mad Men’s Elisabeth Moss, is based on Margaret Atwood’s dystopian novel, and is set in a version of the US where women are treated as property of the state.

The short teaser is based on Ronald Reagan’s Morning in America presidential campaign advert, and hints at a new role for Moss’s character Offred, who appears at the end to disrupt the cosy narrative.

Amazon Prime and Netflix also got in on the Super Bowl action, with the former previewing their TV remake of Joe Wright’s 2011 action thriller Hanna. The first episode was made available as a surprise drop for just 24 hours after the game ended.

Not content with making the most expensive TV drama ever with The Crown, Netflix revealed they’ve made a wildlife documentary with Sir David Attenborough. The new show, Our Planet, comes to the streaming service on 5 April.

4. Pepsi gets all defensive… and it’s hilarious

It was another vintage year for Pepsi, which this time played on the fact it’s often compared and/or mistaken for Coca-Cola.

The advert shows a waiter replying to a customer after she asks for coke: “Is Pepsi OK?”

Comedian and actor Steve Carell jumps up to defend Pepsi and is soon joined by rappers Cardi B and Lil Jon.

That was the only glimpse we saw of Cardi at the event, after she declined to perform at the Super Bowl so she could “stand behind” Colin Kaepernick.

The former San Francisco 49ers quarterback sparked controversy by kneeling down during pre-game anthems in protest at alleged police brutality towards ethnic minorities.

And the social reactions to Pepsi’s post? A heated debate about Pepsi vs Coca-Cola, of course.

5. Carrie Bradshaw is back – but not as you know her

Pepsi wasn’t the only beverage in town at half-time, with Belgian lager Stella Artois sending Sex and the City fans into meltdown as Sarah Jessica Parker AKA Carrie Bradshaw TURNED DOWN A COSMOPOLITAN for a Stella!

Star of the half-time show, Maroon 5’s Adam Levine, joined John Legend in a nappies (or should we say diapers) advert which also featured Legend’s children Luna and Miles.

Legend, who lucks out on ‘Stinky Booty Duty’ as he attempts to tackle Miles’s dirty nappy, soon breaks into song and is joined by a throng of fellow dads and babies for the chorus.

But it’s Legend’s wife, Chrissy Teigen, who steals the show at the end of the commercial. That look is dirtier than the nappy.

We can’t help wondering if Miles will thank his parents for this ad when he’s older though.

While the happily married tennis star Serena Williams definitely has no need to join Bumble – the dating app where women make the first move – she was happy to share an empowering feminist message for its quarter-time ad.

“So make the first move. Don’t wait to be told your place. Take it.”

It wasn’t the only positive political message to come out of the trailers.

Last month, a picture of an egg became the most popular image ever on Instagram, attracting 52 million likes and beating the record set by Kylie Jenner’s announcement that she’d had a baby.

On Sunday night, the egg was seen using its new-found fame to talk about mental health.

“Recently, I’ve started to crack, the pressure of social media is getting to me,” said the egg.

“If you’re struggling too, talk to someone. We got this.”