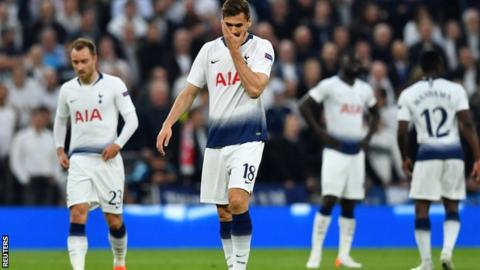 Tottenham boss Mauricio Pochettino called on the unlikely spirit of Toy Story hero Buzz Lightyear to inspire Spurs’ Champions League quest – only to run straight into a brilliant young Ajax side who deal in brutal reality, not Hollywood fantasy.

“To infinity and beyond,” announced Pochettino before Spurs’ first Champions League semi-final. But it is the Dutch league leaders who look like nothing is out of their reach as they left Tottenham Hotspur Stadium with a crucial 1-0 advantage.

If Tottenham’s run to the last four has taught all observers one thing, it is that they must never be written off. This is a team that has advanced to this stage despite having to call on all their reserves to just get out of the group stage.

Pochettino’s dilemma is that his players have to claw back a deficit against Europe’s most exciting young team – who have almost emerged from nowhere to sweep brilliantly past holders Real Madrid and Italian champions Juventus, and are now in pole position to dismiss Spurs.

The hosts had just one shot on target on Tuesday, and only one of the previous 17 teams to lose the first leg at home in a Champions League semi-final have gone through.

In other words, it is not looking good.

Spurs can claim mitigating circumstances with the absence of the suspended Son Heung-min and the injured Harry Kane. But they must also face the truth that for all their endeavour they did not trouble Ajax and all the serious quality came from the visitors.

It was Frenkie de Jong who ran midfield, not Christian Eriksen. It was match-winner Donny van de Beek who made those surging, searching probing runs that made the difference, not Dele Alli.

And at the back Ajax have the boy who looks and plays like a man: 19-year-old captain Matthijs de Ligt.

This trio, indeed the whole Ajax team, is built in the old values and traditions of this great club – developing their own without lavish spending, selling and then re-investing, renewing.

It was Ajax’s most iconic figure, Johan Cruyff, who set the benchmark for their strategy when he said: “Why couldn’t you beat a richer club? I’ve never seen a bag of money score a goal.”

This is a policy that will serve them well once more when De Jong heads to Barcelona this summer and those richer clubs come calling for De Ligt and Van de Beek.

Spurs have also kept their powder dry in their transfer market – more out of necessity with a new stadium to build – but on this evidence Ajax’s greater experience in operating with such care and frugality is reaping the richer reward.

Ajax looked several stages behind Jose Mourinho’s Manchester United in the Europa League final in Stockholm two years ago. It does not take a genius to spot the difference in the direction of travel in those two clubs since then and, barring another Spurs revival in Amsterdam, they can also place themselves ahead of a club that has made itself a fixture in the Premier League’s top four.

Erik ten Hag’s side celebrated with the sort of measure and composure that reflected their performance. They were clearly satisfied but know this is not a case of job done.

However, it would be an act of bravery to bet against them, and there is the fearlessness and courage of youth that appeared to make Ajax almost unaware of the pressure this Champions League semi-final brings.

The Dutch outfit are a pleasure to watch and both Barcelona and Liverpool, who contest the other last-four tie, will be well aware that there is a belief in this team that they can go all the way and lift the trophy once more.

For Spurs, it was a night of bitter disappointment and frustration in their lavish new surroundings. It was a night when their resources were simply not enough to cope with the absence of Son, Kane and midfielder Harry Winks – key gaps exacerbated by the loss of Jan Vertonghen after a heavy blow to the head and a facial injury sustained in an aerial collision with team-mate Toby Alderweireld and Ajax keeper Andre Osana.

Son will return in Amsterdam and he gives Tottenham an extra dimension, but the force is with Ajax now and the dream that suddenly came into view after the drama of the quarter-final win over Manchester City may be out of Spurs’ grasp.

They will need to summon up the spirit and quality that got them out of their group despite a dreadful start in which they lost to Barcelona at Wembley, then were beaten at Inter Milan and then drew against PSV Eindhoven in the Netherlands.

They must rediscover something of what saw them ease past Borussia Dortmund in the last 16, then come out on top in a classic quarter-final against City.

The problem is Ajax. And as Real Madrid and Juventus will tell you, that is a very big problem.